To the Novel Experiment!

Earlier this month I announced that, in addition to the Superheroes of Science Blogfest, I would move to another blog. To Campaigners just happening by, I'm sorry you have an extra link to click. ;)

I'm a bit nervous half of you trusted readers will vanish, especially since free wordpress doesn't allow for Google friends connect. The new design, however, is totally worth the risk and hassle.

Without further ado... to The Novel Experiment !

Email ThisBlogThis!Share to TwitterShare to FacebookShare to Pinterest
Labels: blog 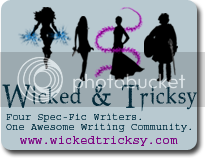 Hey, just wanted to remind everyone that while I am absent here, today is my post day on Wicked & Tricksy. In case you've joined from the Campaign and have no idea what I'm talking about, here's a quick W&T explanation, from my first post on the topic.


Wicked & Tricksy is an initiative by four aspiring writers of speculative fiction to provide a place for the community to gather and share. There'll be plenty of craft talk, asking of hard questions and offering of insight, and we hope that you will be as much a part of it than us.

My three wicked colleagues are Margo, Sommer and SB, three incredible writers I am honoured to work with. We've had a plethora of badass guest bloggers too!

Here's the interesting parts, guys: we are always on the lookout for more guest bloggers. Every Friday we welcome another writer from the community and share the spotlight. It could be you! We don't bite, I promise. We just take your soul. So if you want to join the fun, just head over to our guidelines!

On Creative Classes and Group Critics

Yesterday I started my third week in my Creative Writing program. If you've been around this blog for a while, you'll have noted my posting rate went down. It isn't a coincidence. There is a lot to read and a lot to write. I'm super busy.

The good part? I have never loved being buried under a pile of schoolwork this much. I'm having a blast!

I'll say this: most of the general writing advice I've received are things I've heard on the interwebs before. Watch out for the "feel", "realize" or "see" in the texts. Don't step out of the POV. Have a strong opening paragraph. Show don't tell (though this one was phrased nicely. My teacher said "Remember, you have little to say but a lot to show).

I expected this. I've been digging the internet for writing pearls for at least two years now. Not that I've heard it all, but I believe I have a fair grasp on what I should do. It's applying it that is difficult. I came to the program to write texts and be critiqued, to receive personalised advice.

This week I had my first taste of critique groups. I loved it.

I was insanely nervous at first, in no small parts because the first texts to be critiqued wasn't my favourite. As in, I was exhausted when I wrote it, and the structure was all wrong, and I was certain there'd be a dozen other things that failed about it.

It went well, and I was relieved. Then came the Novel Writing class, in which I presented pages I was really proud of.* And guys, I received lots of great comments. But not just that. They picked on everything that was wrong despite the praises. They found my real first sentence, trimmed the extra fat, pointed out the repetitions. Everything I'd missed, or just about.

And I discovered how some are great at finding overall problems while others will find your spelling mistakes. It's great to have a good range of readers, both strangers and writer friends. I feel like I've learned more in the last two days than I have in months. From receiving and giving critiques.

I'm aware critique groups aren't for everyone, or that not every group will fit every writer, but in the chance you get an experience that is anything like mine so far, I encourage you to seek other writers and try this group thing.

Also, related but not quite the same, my teacher loved my novel pages. *happy cloud*


Don't forget that next week is the Superheroes of Science Blogfest!
Posted by Claudie A. at 8:22 PM 5 comments:

Three Blogfests or A Recipe for Frankenstein

It's blogfest season! Don't tell me there's no such things. There is no other way to explain the pile (read three) of new and awesome blogfests coming our way. One of which is mine. Yeah.

Anyway, here they are:

The I AM LEGEND blogfest 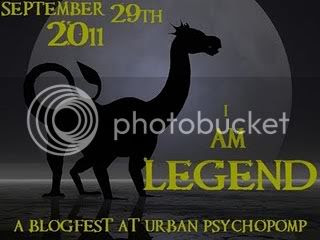 My blog isn't the only one who's nearing its one-year anniversary. I stopped counting how often I linked to Urban Psychopomp, but there you go. Once more! In her own words:

"The idea behind the blogfest is to give people an opportunity to share what is EPIC LEGEND WIN about their WIP or their favorite book. Is it a larger than life mythical creature? Is it a hero possessing such tenacity that he puts all other heroes to shame? Is it a war of such devastation that the human psyche will never be the same?"

This is going to be fun. There is Epic in all of our stories, and it's time to get it out. Not to mention, there are prizes! Hoorah! 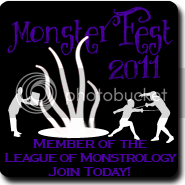 Halloween is getting closer, and Sommer Leigh is preparing something big for it. It's no secret that we need to prepare ourselves from the onslaught of monsters that will rise on October 31st, and for that she is calling forward the League of Monstrologists.

Who are these guys? Well, us! Or, from the page: "Anyone who studies, writes about, reads about, hunts, loves, and/or is scared of monsters. There’s no formal education or training, no credentials needed. If monsters stalk your dreams, your waking curiosities, your writing, then you’ve been a Monstrologist all this time!"

If you're a monstrologist, it's your solemn duty to help us build a comprehensive informal guide of all things monstrous and terrifying! You can (and should) learn more on the MonsterFest's page. 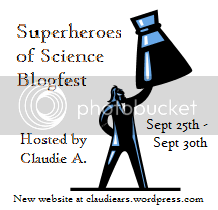 Yep, I know, this one is mine! I just wanted to remind you that sign-ups are ongoing for the Superheroes of Science Blogfest, celebrating the great scientists of our world, whether imaginary or not.

I want to stress this last point, because I'm well aware that today, scientists don't occupy a place of prestige and influence, and most people only know a few names. There are, however, a great number of scientists in movies, novels, TV shows and comics. It doesn't matter if your scientist is real or fictionnary, a hardcore physicist or an engineer. If you love him (or her) or if was an influence on your life or stories, this is the time to honour him.

Don't forget I'm giving away a copy of Forgotten Gods, a historical novel from fellow scientist and writer SB Stewart-Laing, at Writing the Other. It's coming out on the e-shelves tomorrow! So excited.


So this is it. Monsters, Mad Science and Stuff of Legends. I told you this was a recipe for Frankenstein!

Gummy Embyo and Other Transparent Organs

Biologists have long relied on dissections to study the body and organ structures of different animals. We've all had that class where we cut up a bull's eye, a frog, a mouse or a fish. Sometimes all of these.

We've also used specific species to study the embryo's development, such as the zebra fish, which has the awesome particularity of being transparent at that stage, and which we engineered to remain transparent all the way to adulthood.

Those are two mice embryo. The one on the right was treated with Scale, and now you can see everything inside.

The beauty of Scale isn't only that it can turn tissue transparent. It also does so without interfering with the fluorescent dye commonly used today in our best imagery techniques (these are very awesome, and I spoke about them in my three posts regarding the brainbow here, here and there).

This means scientists are able to colour specific tissues with a fluorescent protein and use the transparency reagent to remove all interferences. This gives them images of unprecedented clarity. The Japanese team used it to study the mouse's brain, but it is applicable to just every tissue under the sun.

What Remains to be Done

Scale currently has one big disadvantage: it's too potent to use on living organisms. Dr. Atsushi Miyawaki, the leading scientist on the japanese team, believes this could change. They're currently working on a "another, milder candidate reagent which would allow us to study live tissue in the same way, at somewhat lower levels of transparency."

If you want to know more, you can read the io9 article on the subject. I have to agree with them: the transparent embryo looks like a gummi. Yum!
Posted by Claudie A. at 12:15 AM 9 comments: 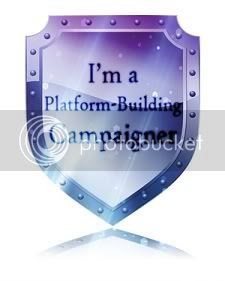